I’m sure there will come a day when we are all scrounging around for some semblance of a new good song to listen to and coming up dry.  Well , that day ain’t here yet.  Once again the mp3’s are piling up in my head, so here’s another Pop Overload to clear it out.   Like the ones before, the Pop Overload is about both quantity and quality…and the bonanza continues…

Don’t have to call it a comeback, but Brideshead are.  Germany’s Brideshead return with a four song 10″ after a long hiatus.  Indiepop aficionados undoubtedly remember these guys for their two albums Some People Have All The Fun and In and Out of Love.  It’s bright bouncy fun that isn’t afraid to let the sunshine flood in.

Outdoor Miners seem to be victims of geography. If they were from Denton or Brooklyn or LA everyone would be going all verbal on these guys. As it is they’re holed up Edmonton, Alberta probably frozen in some snowbank by now. This is their second single on Pop Echo. Both are limited to 300 copies and inexplicably still available. These should’ve sold out long time ago.

You’re probably saying to yourself, hey wasn’t Idle Times on the last pop overload?  I can’t help it, the more I hear from their upcoming album on Hozac the more I can’t wait.  Seattleites, don’t miss their next gig, September 30 at the High Dive with Coasting.

Seems the Crystal Stilts have come out of hiding with a new single and it could be the least unhappy (notice I didn’t say happy) singer Brad Hargett has ever sounded.  It’s definitely late 80’s British in style, I hear the Railway Children.  On the b-side they sound like they’ve been getting drunk and listening to country music.  Weird, I think I may like their drunk country better than their 80’s Brit.

stream: Crystal Stilts – Shake the Shackles (on the way from Slumberland)

Alex Kemp (Small Factory) is back with Rat d’Hotel part deux in his three part series.  Heart Goes Boom is understated and slyly danceable that will make you weak in your knees. Just as good as Rat d’Hotel part one, only this time with more rats.

mp3: Alex Kemp -Heart Goes Boom (get one from the man himself)

The new Flight song from the upcoming Lead Riders EP is my favorite Flight since his Sweet Rot debut.  It keeps the dark blown out Blank Dogs feel, but adds a slithery melody that snakes into your brain.

Philadelphia’s Reading Rainbow give us a teaser from album number two due from Hozac in November.  It’s a big sounding song.  They sound like they got a whole bunch of their friends to help belt out the song.  Infectiously happy sounding and pretty much guaranteed to put a smile on your face while your wasting time. 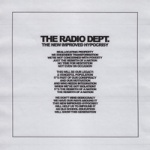 Hypocrisy Is the Greatest Luxury, and Radio Dept. know it. This song hit the ether this week in advance of Sweden’s election. It’s a fair guess to say Sweden’s current right wing government is not the band’s preferred one.