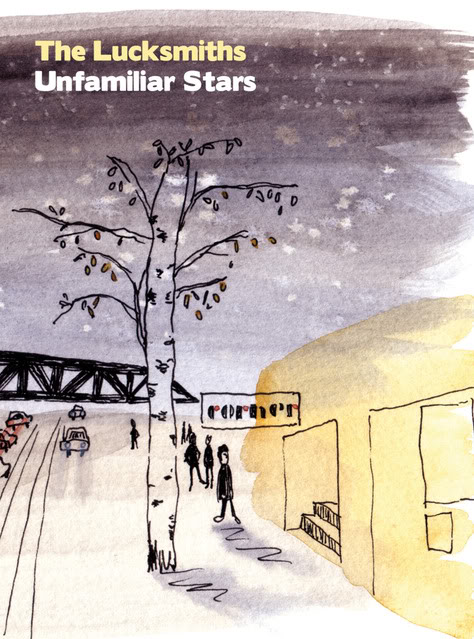 I remember the first time I saw the Lucksmiths live.  I was living in Washington, DC and the band was over playing their first ever DC  show.  It was at the Galaxy Hut in Arlington, a tiny bar where they clear  away a few tables to allow bands to play when they have bands.  It was around the time of  A Good Kind of Nervous, their third album and the first one to be released here.  I also remember they had a new single they were selling too, their first single for Matinée, the Untidy Towns 7″.
Not sure what to expect, I had dragged my girlfriend, my sister and her boyfriend along to the show anyway. I don’t remember if the place was packed, but it was pretty full, and with people who may or may not have been fans of the band. The Lucksmiths proved to be charming fellows as I recall and their jovial infectious songs and personalities easily engulfed the tiny room. Tali sang and played drums standing up and with brushes!? Marty played his guitar like he was in the Wedding Present and Mark’s bass playing had a groove and adroitness to it that belied their twee songs. Marty was the main songwriter and he had a clever way with words that could bring the mundane to life. I hopped aboard the Lucksmiths train that night and never got off.
I had the opportunity to see them play and few more times over the years but I was still kind of bummed they never made it back to the States for a farewell tour after announcing that they were calling it a day. As a farewell to everyone that couldn’t make it to their farewell shows the band have released a DVD of their final show at the Corner Hotel in Melbourne. It features a cover painted by Mark Monnone, 30 plus songs few special guests and top quality sound. The DVD also contains a short film that follows the band on their run-up to their last shows and final recording session. So if you missed those final shows, or have been a fan but never had the opportunity to see them live, it is your good fortune that the Lucksmiths are not camera shy.  So, darling roll the window down, come round if you’re not too busy and get your copy today from Matinée here in the States or Lost and Lonesome in Australia.