Remember when Ride lost the plot after Going Blank Again and tried to morph their sound into some neo-psychedlic 60s blend of the Byrds, Velvet Underground and Buffalo Springfield but ended up sounding like the Black Crowes? Tuesday night at Chop Suey the UK’s Ultimate Painting demonstrated the tangent that Ride should have taken. Their set brimmed with paisley tinged psychedelia that trod the fine line of subtle melodic turns, buzzy droning and all out jams.

The group’s self-titled album came out last year on Chicago’s Trouble in Mind. The record has a subdued sound to that features major nods to the Velvet Underground’s prettier side, but live they crank up the danger levels into White Light / White Heat territory. Talking Central Park Blues was a great example of this, with Jack Cooper taking the lead on this New York narrative that is their sister Ray making it sound a lot more energized than the recorded version.  Cooper also plays in Mazes. In Ultimate Painting he shares guitar and vocal duties with James Hoar from Veronica Falls and Proper Ornaments. It seems like a true collaboration, with both contributing to the songs. Cooper may take a lead vocal, while Hoar takes the lead guitar part, and both contributing harmonies to the other’s vocals.

They also included a couple new songs from an album that they said would be coming out in August. One of them showcased the influence of the Grateful Dead (Casey Jones) that I hadn’t noticed before, but is fairly obvious given the group’s twitter icon. The set closed with with Ten Street which they turned into an extended jam. The rhythm section provided a great stage for Cooper and Hoar to get a little crazy playing off of one another, going into a few rabbit holes of guitar goodness. It lasted for about 10 minutes but it could have gone on for 20 and no one would have complained.  Live Ultimate Painting seem to have an innate sense of when to head off on a tangent extending their solid album into something better and much more interesting.

Ultimate Painting’s self-titled album is out on Trouble In Mind. 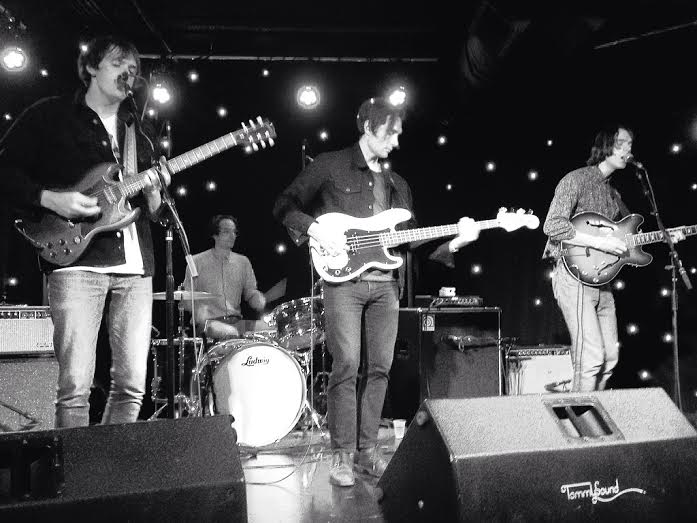 Seattle’s Universe People opened the show playing songs from their two albums as well as new one. They were solid as usual. They’re jerky angular songs keep you on your toes. The Modern Girl, Chemistry, Druids and Vampire Prison were all present in their set and demonstrated how great this band is.