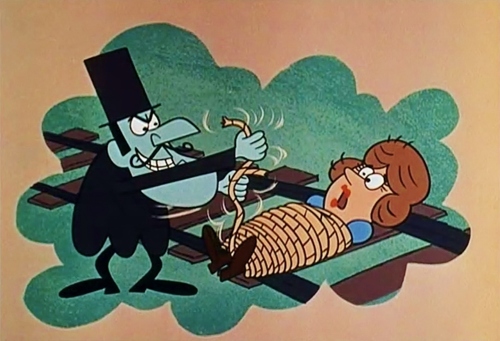 Traams, walk the fine line of angular post punk and hypnotic motorik inspired grooves. You get the feeling listening to their debut album Grin that  they were eavesdropping while the Wedding Present were recording Seamonsters with Albini, were in Stockton at Pavement‘s inception, have th’ Faith Healers Lido stuck in their van’s cassette deck, have drank at the fountain of Klaus Dinger, and hang out with the Hookworms. I know that last one is true since MJ of the Hookworms along with Rory Attwell  recorded Traams debut album.

Grin is a blood brother of Hookworms’ amazing album Pearl Music. Singer and guitarist Stuart Hopkins has an unhinged voice that could go off the rails at any moment giving the songs an unpredictability while the underlying guitar bass drum hypnosis by way of spiral scratch grooves keep you tied to the tracks. The last couple of weeks as I’ve been tethered to this record I’ve felt like the cartoon damsel in distress tied to the tracks as Traams locomotive rumbles down the tracks. Are the Traams Snidely Whiplash or are they my Dudley Do-Right? Tune in next time for “This is the very last traam” or “Blogger on the tracks.”

stream: Traams – Flowers (from Grins out on Fat Cat Records)

Some bands have what you might call rabid followings. People that devote a lot of their lives to a band, they collect everything that is released, make matching band t-shirts and follow the band around when they tour. The Wedding Present is certainly one of those bands. Last night there were quite a few super-fans there with Scopitones West Coast Tour shirts who were following the band on their west coast leg of their US tour. Gedge seemed to be on a first name basis with more than a few of them, carrying on conversations with them between songs.

This was sort of a homecoming for David Gedge who lived in Seattle for a year while he wrote songs for Take Fountain. He’s since moved on to Los Angeles where he wrote songs for the new album El Rey. Mid set Gedge asked if anyone had any questions. I wanted to ask him what city he was moving to for the next album, but failed to blurt it out. I predict either Miami or Chicago, time will tell.

The set was a blast with the Weddos starting it off with the jangling rush of Kennedy and then immediately into It’s for You. The songs came in rapid fire succession with one song ending, and the next coming without even a breath. They played about half of their new album El Rey and those songs sounded stronger in their live context with them getting that little extra rapid Wedding Pesentesque jangle treatment. Gedge and company did not neglect their extensive back catalog, going back as far as You Should Always Keep in Touch With Your Friends. After playing it, Gedge remarked that anyone remembering that song was too old to be there. If that were the case, I think most of us should have left. The old songs were what I was there for and I was not disappointed with the band pulling from George Best, Bizarro, and Seamonsters and both the Hit Parades.  This Wedding Present gig was pretty much everything a fan, or super-fan, could have asked for with a lot of the old mixed in the with the new.

mp3: The Wedding Present – Spider-Man on Hollywood (buy a copy of El Rey)